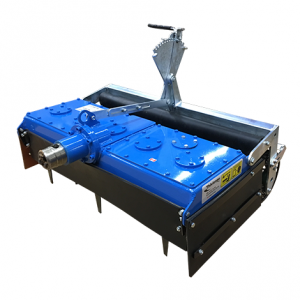 The rotary power harrow is an excellent attachment for preparing seedbeds prior to planting. We offer it in several sizes, ranging from 21″ to 32″.

It includes several sets of tines, which each rotate about a vertical axis (not horizontal like a rear tine tiller). Thus, they stir the soil in a motion similar to that of an eggbeater.

The horizontal stirring action of the harrow avoids disturbing soil layers and leaves the soil structure intact, unlike the rototiller, which mixes topsoil with subsoil. This is healthier for your soil because it does not disrupt the soil microbiology as much. The horizontal action also reduces weed seed germination by not bringing new weed seeds already in the soil to the surface. In addition, soil compaction is less, helping to prevent the formation of hardpan. 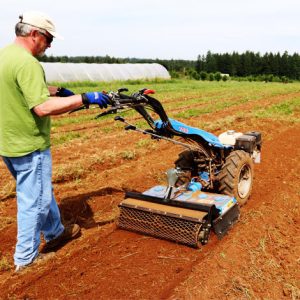 The power harrow floats independently of the horizontal axle of the tractor, allowing it to follow and level out rough terrain.

The harrow now features what BCS calls the “Josephine” lever, which allows you to quickly move the implement into the transport position at the end of the row to simplify turning. After the turn, you can use the lever to quickly return the implement to its previously set depth.

Market gardeners often choose the 32″ size harrow, which is ideal for working with 30″-wide garden beds. For both sizes, the depth is adjustable from zero to 5″.

We recommend using 12″ wheels on the walk-behind tractor when using the harrow with models 749 and up.

Use of the harrow requires a Bumper Weight Kit, which improves balance and makes turning easier at the end of the row. It also requires the use of a Quick Hitch bushing.

Tips on Using the Power Harrow with the BCS 853 Tractor

The help and guidance provided by you and your staff has been exceptional. I would not have been able to become as familiar with the BCS tractor as quickly as I have had it not been for your patience and expertise.

Large inventory in stock. Special discounts are available on certain tractors and implements.
Please call us at 254-829-2474 for pricing and details.