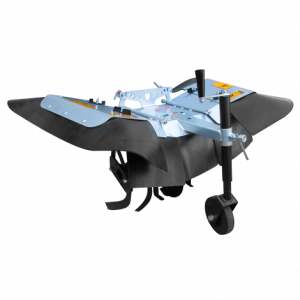 The Power Ridger is ideal for hilling potatoes and other row crops. It can quickly create a trench for planting potatoes or flower bulbs. It’s also useful for removing weeds from the edges of garden rows and garden beds and for re-establishing foot paths between beds.

The Power Ridger is designed for use on previously worked soil, not for primary tillage. It works best in soil that has already been loosened by a tiller or rotary plow.

The Ridger mounts to the front of a BCS tractor. It throws soil to both sides (right and left) leaving an open trench with ridges on both sides.

Its standard working width is 22 inches.

The angle and width of soil discharge are controlled by the width and angle of the wings, which are easily adjusted using hand screws and a spring loaded pin. The wingspan is adjustable from 30 to 39 inches.

The front wheel lets you set the working depth for the implement and doubles as a transport wheel.

The Power Ridger weighs 132 pounds (in comparison, this is 60 pounds less than the 30″ Flail Mower). Because the engine of the BCS tractor acts as a counter balance, it is relatively easy to turn the unit at the end of each row to start the next row.

The Power Ridger is compatible with BCS Tractor models 722 and up and with BCS Model 620.

Note: if you are using the Power Ridger on a BCS tractor that has a diesel engine, you may need to use the Sickle Bar Weight Kit. The Power Ridger is compatible with the same 33 pound weight kit that you would use for a Sickle Bar Mower.

I received my equipment at the terminal in Birmingham yesterday. I want to thank you guys for such a pleasant experience with both transactions that we have made. Your professional manner of doing business has been greatly appreciated. Again, thank you! Barry

I Appreciate that You Took the Time

I enjoyed meeting you and your family when I came to pick up my BCS equipment. I appreciate that you took the time to go over the equipment and how to operate it. It can be hard to find quality equipment and quality people, but I’ve found both at Homestead Maintenance. I look forward to… Read more “I Appreciate that You Took the Time”

Large inventory in stock. Special discounts are available on certain tractors and implements.
Please call us at 254-829-2474 for pricing and details.