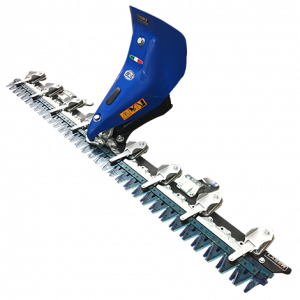 The Dual Action Sickle Bar Mower attachment offer several advantages over its single-blade predecessors, including less vibration and greater efficiency and speed when mowing. A key difference between it and the Single-Blade Mower is that it contains two blades, which move in opposite directions.

Both types of Dual Action Sickle Bar Mower are much wider than the tractor’s wheelbase. This feature makes it easy to trim alongside ponds, under fences, along  slopes, or in other low-clearance places. The sickle bar mower makes it much easier to mow in such areas than a conventional tractor. It is also useful for harvesting hay.

Please note: The 82″ version should only be used with the model 660 Hydrostratic tractor.

Learn More About BCS Mowers with This Video

We have been so impressed with Texas BCS and highly recommend their company to purchase from. They were easy to work with and made the purchase process simple. We were able to get an extensive lesson from Shahar on how to use the equipment and he made sure we were comfortable with it before we… Read more “Texas BCS Highly Recommended”